If you know anything about judo, you know who Neil Adams is: World champion. Two-time Olympic medalist. Five-time European champion. 8th dan. Author of numerous books and videos. Adams is one of the foremost judo instructors in the world.

Being familiar with Adams’ name and accomplishments, I was thrilled to learn that he would be coming to my town for a seminar, sponsored by the University of Kentucky Judo Club and by the Valhalla Academy. I was even more thrilled when the decision was made to hold the seminar at my home gym – Four Seasons Martial Arts. (At a ridiculously low price as well. Don’t get me wrong – I’m grateful – but I would have been willing to pay significantly more.)

Despite my excitement, a part of me was wondering how much I would be prepared to actually learn from a judo legend. My judo skills are … rudimentary at best. Obviously Adams would have a lot to offer the advanced competitor, but would he be showing much that was relevant for someone who still struggles with the basics?

I needn’t have worried. Adams is a world-class teacher as well as judoka. Participants at the seminar ranged from white belt up to at least 6th dan*, and I suspect that everyone was able to take away something of value.

*(6th dan Eberhard Kieslich was on hand to act as an uke and I saw many other senior instructors from the Kentucky judo community. Miscellaneous note – at BJJ seminars I’m used to being the oldest person present. That was far from the case for this class.)

For warmups, instead of the standard calisthenics, Adams had us playing judo-relevant movement games. We started out moving around the mat in fighting stance, trying not to run into anyone else in the crowd. Then we had to try touching other participants on the left shoulder without being touched ourselves (no blocking allowed, only movement). Then we tried touching the right shoulder, then the back. Then we tried to grab sleeve grips, then lapel grips without being grabbed ourselves. No blocking, only constant movement.

Once we were warmed up, we got down to serious instruction. Adams covered a variety of techniques, primarily tai otoshi, uchimata, some gripping tactics, and some entries into juji gatame. Besides the specific techniques being demonstrated, he focused quite a bit on the underlying principles that apply to all the tachi waza. He came back repeatedly to emphasizing proper head position and the coordination between feet and hands.

I came to realize that I have been fundamentally misunderstanding tai otoshi and uchimata for as long as I have been practicing them. I have some work ahead of me to reprogram old habits.

One thing that was different about Adams’ teaching approach: all the throws and entries were applied off of movement with our partners. There were no static uchikomis. Adams actually refused to dictate any specific footwork for an entry. He pointed out that the standard stepping patterns we all normally learn in our initial judo classes don’t really work that way once both parties are moving around. Instead, he wanted to make sure we understood exactly the position we should be in relative to uke at the moment of the throw and then find our own footwork to arrive there in the moment.

After the seminar Adams took questions and offered insights into a number of topics, from the process that led to the recent changes in the rules of judo to effective ways of coaching and practicing.

I’d like to thank Robert Burge of the UK Judo Club and Brian Jones of the Valhalla Academy for arranging this amazing training opportunity. 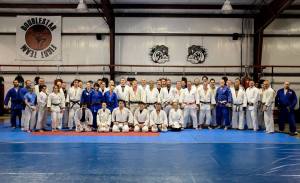 Update: Brian has posted a short interview with Neil Adams that took place immediately after the seminar. Neil Adams interview

This entry was posted in Uncategorized. Bookmark the permalink.

What do you think? Cancel reply